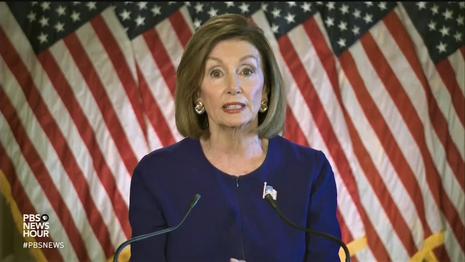 How tilted are the liberal “fact checkers” at PolitiFact? They threw no flags at House Speaker Nancy Pelosi insisting in a radio interview last Tuesday that congressional Republicans were “trying to get away with murder….the murder of George Floyd.” Which Republican congressman killed George Floyd?

But PolitiFact ruled Pelosi was “Mostly True” in a different interview she gave on the same Tuesday, with Telemundo:

“80% of the American people support our Dreamers. Over 70% think they should have a path to citizenship, and that’s Democrats, Republicans, independents.”

PolitiFact’s Miriam Valverde reported they were re-checking a previous True rating: “In 2017, Pelosi made a similar claim about broad public support for these immigrants, which we rated True. We decided to fact-check her latest claim to see if her argument still holds.”

What do you know, it does! “A national survey cited by Pelosi’s office and other polls from the Pew Research Center and CBS News support Pelosi’s claim of widespread support for letting the immigrants stay.”

There’s no need to challenge the validity of the polling. When you call people “Dreamers” and insist they’ve been in America for oh, 90 percent of their lives and only speak English, most people will support that “path to citizenship.” Valverde did point out that the “Mostly True” came because Pelosi exaggerated the idea that over 70 percent of Republicans favor amnesty for “Dreamers.” This poll has it at 57 percent.

But Fox News reported on how Pelosi abused metaphors by suggesting congressional Republicans were guilty of “the murder of George Floyd.” They aren’t merely holding up the bill by House Democrats:

“For something to happen, they’re going to have to face the realities of police brutalities, the realities of the need for justice in policing, and the recognition that there’s many good people in law enforcement, but not all. And that we have to address those concerns,” she said.

“So, when they admit that, and have some suggestions that are worthy of consideration — but so far they were trying to get away with murder, actually — the murder of George Floyd,” Pelosi continued.

How is this not a “Pants On Fire” lie? If Republicans said Pelosi and the Democrats were “trying to get away with murder, actually, the murder of unborn babies,” they would cry “FALSE.” They can’t stand it when Republicans say Democrats favor abortion up until birth.

PolitiFact ruled Donald Trump was “False” when he tweeted “Sleepy Joe Biden and the Radical Left Democrats want to ‘DEFUND THE POLICE’.” But Pelosi can call the GOP murderers, and she gets a pass.